What is Spiritual Warfare? Will the Church Survive? Our Battle Plan To Win

In the movie Independence Day Resurgence, an alien invasion comes to destroy humanity.  If you fully invest yourself in the plot of the movie, remembering the terror of the aliens, their sinister plot against humanity, you would ask the question? Will the human race survive?  Today I want to describe the battle Christians are in.  What is Spiritual Warfare? Will Christianity Survive?  Today I want to equip you with a battle plan so that you can end up victorious in Jesus.

I want you to read carefully the words of a fellow blogger- John Barnett. He masterfully wrote the following words:  https://soundfaith.com/sermons/121148-the-victory-of-jesus-understanding-the-conflict-of-the-nations

“Above the softness of our blue green planet there are hostile forces poised. They range across space lurking and flying about at their master’s bidding. They are former angels. They are Satan the Dragon’s army. They are deadly, vile, malignant and very intelligent. In fact, the word demon in Greek means “intelligence”.  These aliens to our planet are highly skilled, incredibly powerful, usually invisible – warriors. They can hear us talk, they can pass through walls, they can fly through space, they inhabit human and animal bodies, they alter human behavior, and they afflict humans with disease, anguish and turmoil. These extra-terrestrial beings can take on various forms looking human, looking powerful, and looking fearsome.  They are watching over the realm of the serpent and his seed.

You see, we Saints of God are at war this morning. We have joined into the conflict of the ages. There is a conflict going on the likes of which most of us haven’t fully comprehended. Swirling around us are the unseen beings of the spirit world. We too engage them in warfare. Behind the scenes in every boardroom, political planning session, military strategy session, in the classrooms where our children go to school, even in worship services, and everywhere else, these unseen spirits watch, listen and whisper their lies.

It is the battle for the Earth that rages. The god of this world has dispatched his demon warriors with one target, to blind the minds of earth’s inhabitants until they can’t see and won’t follow – God!”

His goal is simple according to John 10:10 – Kill Steal and Destroy.  What is spiritual warfare? The word itself describes what happens in the heavens.

He was hurled to the earth, and his angels with him.

10 Then I heard a loud voice in heaven say:

“Now have come the salvation and the power
and the kingdom of our God,
and the authority of his Messiah.
For the accuser of our brothers and sisters,
who accuses them before our God day and night,
has been hurled down.
11 They triumphed over him
by the blood of the Lamb
and by the word of their testimony;
they did not love their lives so much
as to shrink from death.
12 Therefore rejoice, you heavens
and you who dwell in them!
But woe to the earth and the sea,
because the devil has gone down to you!
He is filled with fury,
because he knows that his time is short.”

Some of you may be wondering…Will Christianity survive? We look around the planet and wonder as we sense the onslaught of darkness. Jesus asked this question…in Luke 18:8  “However, when the Son of Man comes, will he find faith on the earth?’”

Will we survive compromise in many churches?

Will we survive the influence of the satanic attacks on the church?

Will believers be able to resist the sinful pull of the culture?

Will the majority of believers remain true to our Savior and Lord?

I can assure you of two things:

HERE IS THE BATTLE PLAN FROM NOW UNTIL CHRIST RETURNS

The Church can learn some powerful lessons from the movie Independence Day Resurgence. Although I write with the Bible as my basis, I will use this movie for illustrative purposes only.  Even though Satan intends on resurging and stomping out all of Christianity. We will not go silently into the night!

HERE IS THE KEY

We know that Jesus gave his life and by doing so he defeated Satan in every way. But the word also tells us we are to be willing to give our lives.

Let’s go Back to the original movie in 1996. One guy was willing to sacrifice his life and he became a hero. He is the most unlikely candidate to be a hero.  I do not lift this character up…to emulate him in anyway other than the fact he was willing to lay his life down. He was a drunk. He was a cusser.  He wasn’t too great of a dad.

This odd fellow became the hero of the movie! Why? He decided that was not going to love his life so much as to shrink from death. And he gave his life to “save the world”.  In the movie, this guy was willing to die in order to win.

In order to overcome the enemy of our souls and to defeat the satanic invasion of our planet. We have to be willing to give it all. Even our very lives if necessary.

“they did not love their lives so much
as to shrink from death.”

The big question…are you willing to give your all for Jesus Christ.

What is spiritual warfare?

Part of winning against spiritual principalities is being willing to give our all for the gospel. We must be “all in.”

Many men and women of God have not shrunk from death, by being willing to go and even die on a foreign field to be able to preach the gospel. They packed their supplies in their coffin.

Are you telling me, I am going to have to die in order to defeat Satan? Perhaps not by giving your life, but certainly, you have to die to flesh.  You have to tell your flesh no to what it wants and say yes to Jesus.

To die means to sacrifice. To die means to give all. Some may be asked to die for their faith. I want to say that as we approach the coming of the Lord Jesus Christ. Don’t think for a moment that Satan is going to lay down. He is going to attack harder and with more fury and with greater anger and more cunning than he ever has before. Because he knows his time is short.

The Bible describes this earth as being in a sense under invasion. It has been invaded by a host of demonic entities. Scripture describes Satan like this:

Ephesians 2:2   “…. the prince of the power of the air, the spirit who now works in the sons of disobedience…”

Perhaps greatest of all is the massive deception that Satan has put on the world. Satan has deceived millions into thinking that the world and its joys and pleasures are good and wonderful. Some even think that participating in addictions won’t even harm them.  The end result are lives that are completely devastated.  But we know one thing…the enemy is causing devastation. In the movie Independence Day Resurgence it was physical devastation.  Satan also causes devastation. However, his devastation is of the spiritual variety. 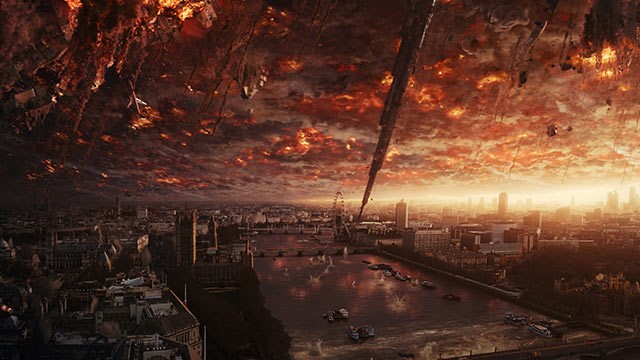 We have to realize the devastation caused by the following

If we recognize the devastation caused by the enemy, we must resist him and he will flee.  Let’s not give him any foothold or place in our lives.

Here is the third part of our plan to survive.

3.  RECOGNIZE WHO THE TRUE ENEMY IS AND RESPOND TO WORLD WITH GENTLENESS AND RESPECT

There was a powerful scene in the movie as two actors are observing the alien space invasion. Over their head is this massive spaceship moving toward earth. One of the key characters says, “It’s bigger than last time.”

We must realize that as we approach the coming of the Lord, the spiritual battle will be much more intense.  The enemies plans and strategies are stronger than before.  But one of Satan’s tricks is to cause confusion as to who the real enemy is.  What is spiritual warfare? It is recognizing who the true enemy is and fighting Satan and his demonic forces.

In this movie, the aliens would have never been defeated had the people of earth started wars with each other.

Who is our true enemy?

Ephesians 6:12   “For we do not wrestle against flesh and blood, but against principalities, against powers, against the rulers of the darkness of this age,[c] against spiritual hosts of wickedness in the heavenly places.”

The true enemy is not believers who aren’t spiritually awake.

The true enemy is not those who have a slightly different doctrine.

The true enemy is not atheist or adulterer or the transgender person.

The true enemy is not even those who persecute the church.

1 John 4:3  “but every spirit that does not acknowledge Jesus is not from God. This is the spirit of the antichrist, which you have heard is coming and even now is already in the world.”

When we fight the wrong enemy by fighting flesh and blood, we violate the Word of God. We are to treat others with gentleness and respect.

1 Peter 3:13-17  “Who is going to harm you if you are eager to do good? 14 But even if you should suffer for what is right, you are blessed. ‘Do not fear their threats[b]; do not be frightened.’[c] 15 But in your hearts revere Christ as Lord. Always be prepared to give an answer to everyone who asks you to give the reason for the hope that you have. But do this with gentleness and respect, 16 keeping a clear conscience, so that those who speak maliciously against your good behavior in Christ may be ashamed of their slander. 17 For it is better, if it is God’s will, to suffer for doing good than for doing evil.”

The true enemy isn’t the secular society we live in.  But we are going to have to learn to give an answer for the hope we have with gentleness and respect.

I really believe in the battle strategy outlined in this article. It is time for the church to win in this battle that is going on.

Do Not Forget God But Remember His Love And Favor Toward You (King David)
How Jesus Suffering Declares "By His Stripes We are Healed" Isaiah 53:5
Do I Have To Work For Living Water? John 4:14
Tags: God at the Movies, Independence Day Resurgence, Movie based sermons, movie sermon, spiritual battle, what is spiritual warfare|

About the Author: Pastor Bob

Bob Millsaps is a graduate of North Central Bible College in Minneapolis, Minnesota and the pastor of Fountain of Life Christian Center in Houston, Texas. He is happily married to his wife Jureen and they have three sons, and one grandaughter. Bob has served the Assemblies of God as a missionary, pastor, youth pastor, and evangelist. Bob currently resides in Katy, Texas

How To Be a Living Sacrifice Romans 12:1
Help My Unbelief Four Ways To Activate Your Faith
How To Pray Through The Disappointments Of Life